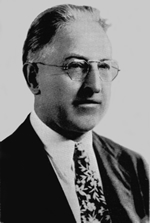 Below is a brief biography of Emil Grubbe, originator of the Memorial Award of the Chicago Radioloical Society. Its author is unknown.

Emil Herman Grubbe was born in Chicago of German immigrant parents on Jan. 1, 1875. He became a wage earner at the age of 13 years, which was not unusual for children at that time, and his childhood, by our standards, was spartan in the extreme. He was first employed at a drugstore as a bottle washer and errand boy. This employment was shortly followed by a much nicer job as office boy at Marshall Field’s store at State and Madison in 1888. By the standards of the time, this was splendid employment for a boy his age. The pay was generous –$2 a week for 10 hours work. During this time he came to the attention of Marshall Field himself, who encouraged him to pursue his interest in science and medicine, and at the age of 15 years Emil decided to become a physician.

It was not uncommon for youngsters of 15 or 16 years of age to enter medical school in those days, but Grubbe’s formal education was so limited that he could not obtain admission to any of the not overly selective 15 or more medical schools then existing in Chicago. He enrolled, therefore, in Northern Indiana Normal School at Valparaiso and by hard work as a night watchman he was able to complete his formal premedical education and entered Hahnemann Medical College of Chicago in 1895. His talent for scientific study and teaching led to his appointment as an instructor in physics and chemistry at the medical college while he was also an undergraduate student. At that time, Roentgen’s discovery in November of 1895 so impressed young Grubbe that he obtained a vacuum discharge tube and began his mutilation and disfigurement.

He conducted an investigation of the fluoroscopic capabilities of the “‘new ray” and, along with Edison and many other pioneers, some of the original investigations into the applications of the roentgen ray. It was at this time that he began to suffer from radiation-dermatitis of the hands and neck. The relationship of these lesions to radiation was clear to him, and at the suggestion of one of his colleagues he began to experiment with the use of this apparatus in the treatment of carcinoma. Success was almost instantaneous. In February of 1896, he founded the first radiation therapy facility in Chicago, at South Cottage Grove Avenue in Chicago.

All of this was accomplished before he graduated from medical school in 1898. He remained a member of the faculty and occupied the professorial chair in electrotherapeutics and radiography until 1919. While at Hahnemann he was perhaps one of the first to organize the modern-day precursor of CME programs, offering two-week courses in radiation physics and the uses of radiation in the treatment of human disease. Simultaneously, in the early-1900s, he was teaching at four institutions within the city as well as maintaining a private practice. He wrote extensively throughout his life, publishing approximately 90 papers.

He was a world traveler and an ardent explorer and vulcanologist, visiting almost all the then-existing volcanos in the world. He was an eye witness to the destruction of San Pierre by the Mount Pelee eruption in 1902.

Dr. Grubbe in his early years practiced both diagnosis and therapy. But in anticipation of the eventual evolution of sub-specialization, he restricted his practice to radiation therapy during the early 1920s, practicing until his retirement in 1947.

His extraordinarily long and active career and his accomplishments were attained in spite of considerable physical suffering as the result of the radiation dermatitis and anemia, which was probably radiation related. His left hand was amputated in 1929 and he underwent many lesser but nevertheless disfiguring surgeries for multiple cutaneous malignancies. He died in 1960 as the result of multiple squamous carcinomas with metastasis.

In 1964 his estate bequeathed to the University of Chicago a sum of money to provide an annual gold medal and lecture in his honor and memory. Since 1970 this medal has been awarded by the Chicago Medical Society at the Chicago Radiological Society meetings.

Dr. Grubbe was an extraorindary man, a creature of his time and place. He was colorful, flamboyant and occasionally saw himself in a somewhat better light than did his contemporaries. He was, however, a true American pioneer physician, largely self-taught, utterly devoted to investigation applications of the “new ray” and to the maintenance of his very extensive private practice. He was not the first to develop fluoroscopy, but he was certainly among the first. He was, however, recognized as one of the earliest radiation therapy specialists in this city and perhaps in the United States.